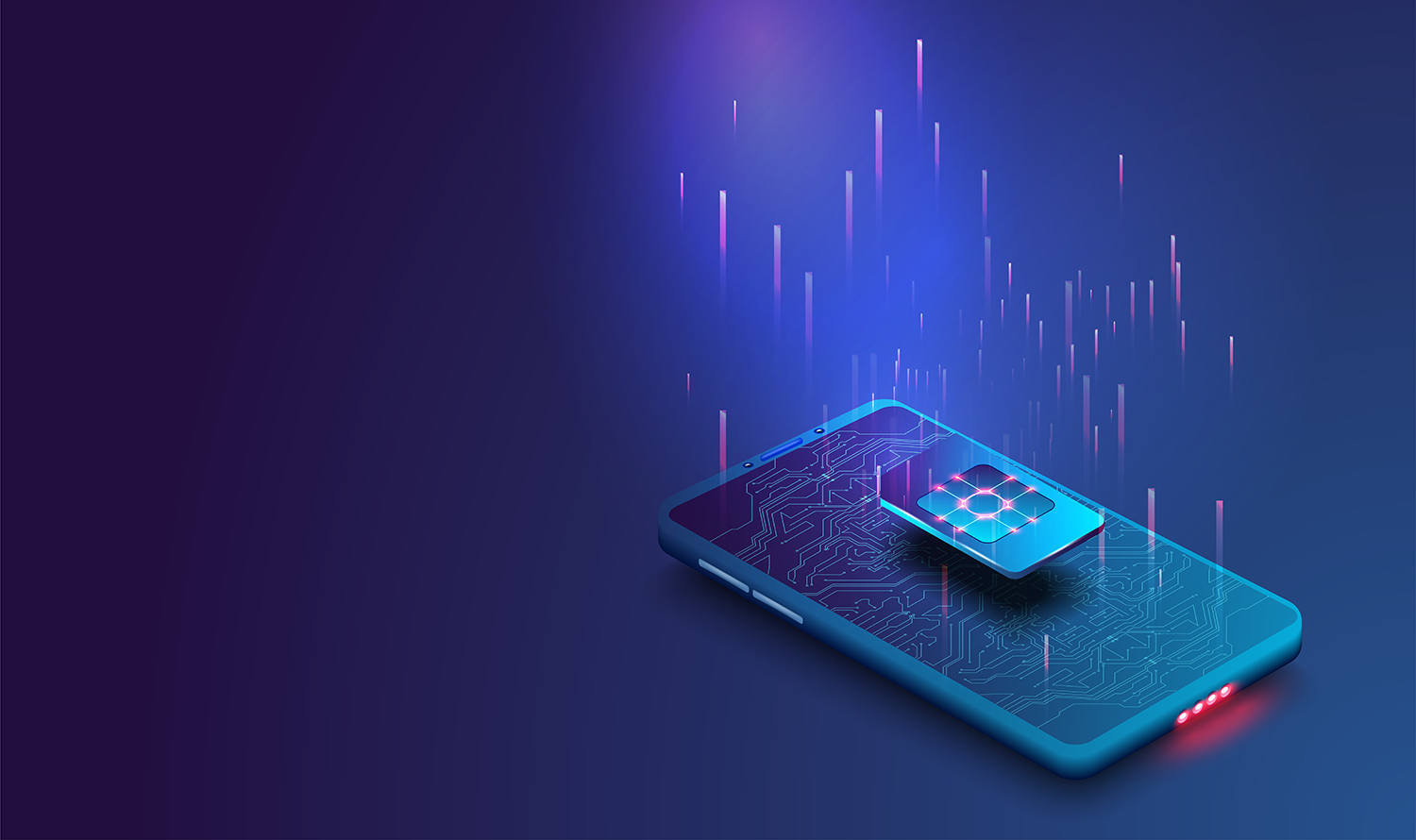 eSIM – 5 Key Points about the eSIM

The eSIM market is very promising, but overcoming certain challenges is imperative to leverage its full potential.

An eSIM can be comprised of either a removable SIM card or an embedded/soldered chip. eSIMs offer new ways of managing and deploying connectivity without the hassle of SIM cards. Traditional SIM cards are owned and issued by specific operator. In the past, mobile connectivity has been built around consumer mobile phones and a traditional retail model with MNOs owning the primary relationship with the customer through SIM issuance and contract management. But the traditional MNO model has not been able to address the modern mobile ecosystem. In contrast, for everyone, eSIM provides an equivalent level of security as the removable SIM card, with a wider array of benefits.

What are the major benefits of an eSIM compared to a traditional SIM card?

But most importantly, eSIMs boast high levels of security.

The biggest advantage of eSIM cards relate to their security. eSIMs imply that secure facilities are no longer limited to specific physical locations. Instead, security is extended to any place with an Internet connection, with eSIM protocols providing security and integrity for data transfers. Secure manufacturing facilities ensure the safety of traditional SIM cards. Operator logistics channels then distribute the SIM cards to the required endpoints, for example retail shops, retail partners or enterprise customers managing fleets of connected devices.

II) The eSIM Market in numbers 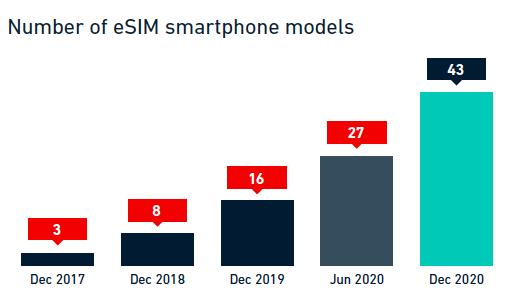 2020 was a year full of optimistic milestones.

The number of eSIM devices commercially available for purchase reached 110 models at the end of 2020, across smartphones, laptops, smartwatches and tablets. (Source: GSMA Intelligence)

A second optimistic figure is that eSIM shipments collectively reported by TCA members increased by 83% year in a year, in 2020 (according to the latest data published by the Trusted Connectivity Alliance (TCA)). 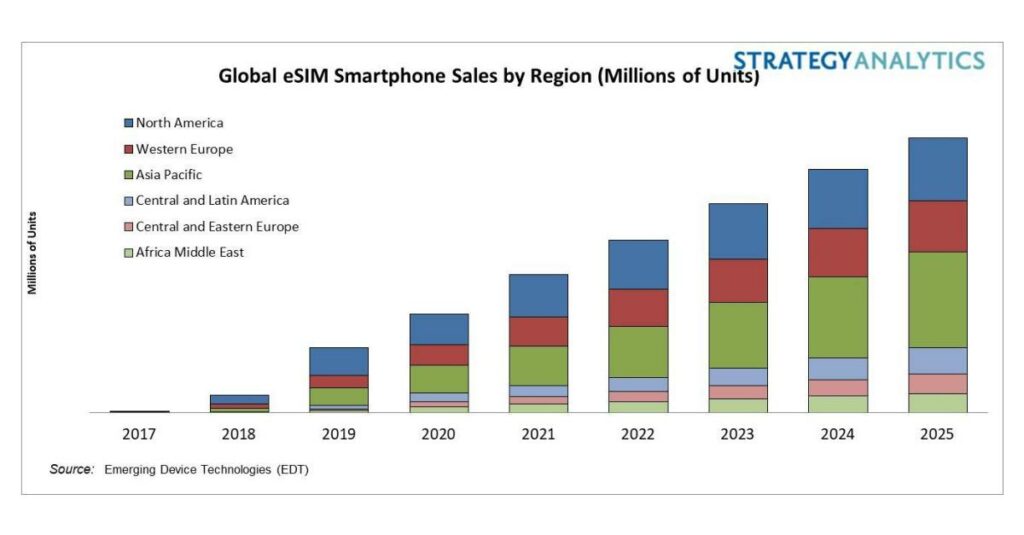 Thirdly, eSIM profile transactions (i.e. the number of times a mobile operator profile was downloaded to a device) also increased by over 300% year on year in 2020.

At the end of 2020, at least 175 mobile service providers (MNOs and MVNOs) had launched commercial eSIM service for smartphones across at least 69 countries (three times the number of countries compared to in 2018).

Finally, since 90% of operators plan to offer eSIM service by 2025 momentum for eSIM launches will likely accelerate in 2021 and 2022, including in developing markets.

One key factor that could accelerate eSIM market adoption is the transition to eSIM-only devices. Today, all eSIM smartphones have been commercialized by OEMs, except for the Motorola Razr (4G model), have dual capability (removable SIM and eSIM). 6 billion eSIM (eUICC- and iUICC-based) capable devices will be shipped cumulatively over the next five years, according to the latest research from Counterpoint’s ETO (Emerging Technology Opportunities) Service.

Steve Adler reacted to these promising figures with the following remarks: “The big innovations I can see in the industry right now are all about taking away the complexity of connectivity. Much of the complexity is pushed down the value chain, so the onus is on the end user to sort out their own connectivity. I see a really big change, a radical change towards selling devices that comes with connectivity”. Beyond the eSIM, the gradual development of iSIM is another source of optimism for the market growth of IoT because this separate eSIM chip becomes integrated into the microprocessor which reduces the number of components, makes it cheaper, makes it smaller. 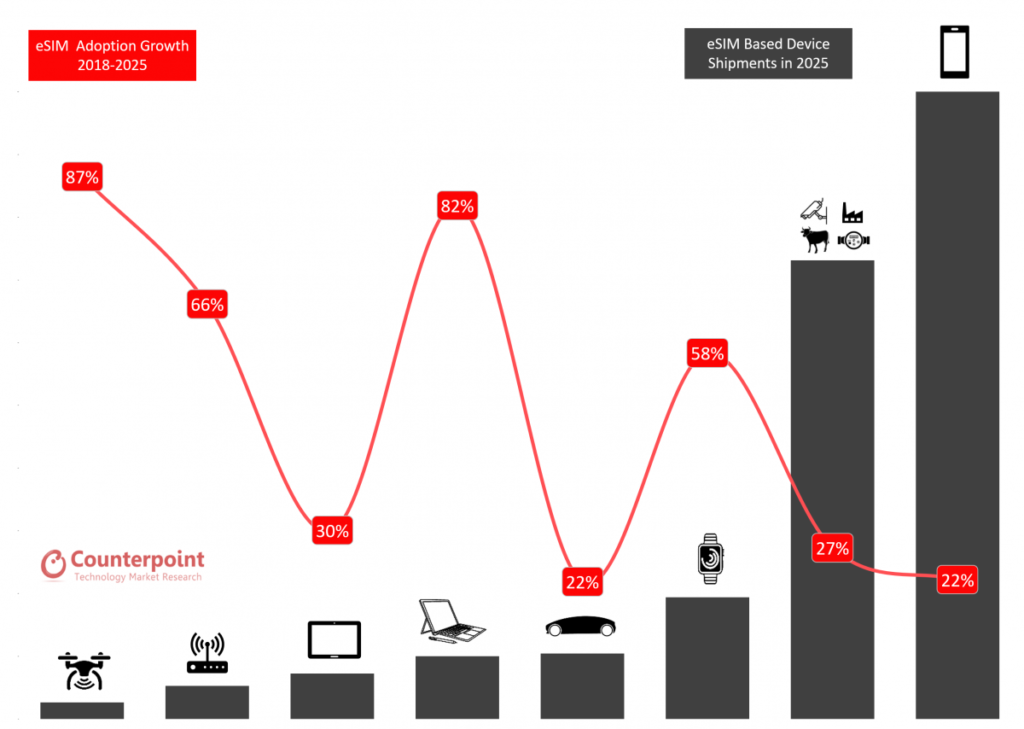 Faster growth of eSIM shipment is another important development for the eSIM ecosystem, especially in the context of the Covid-19 epidemic, as it increased online sales and increased demand for both real-time data and the remote management of devices, due to the pandemic. 2020 was an important year for the eSIM market as it started slowly in 2018-2019 before accelerating rapidly and allowing 27 new models to be launched despite the challenges associated with Covid-19.

Therefore, experts forecast that 2.4 billion smartphone connections will use eSIM by the end of 2025. According to Trusted Connectivity Alliance (TCA), eSIM shipments collectivity reported by TCA members increased by 83% in a year in 2020. It’s a major acceleration given that growth was merely at 50% in 2019. 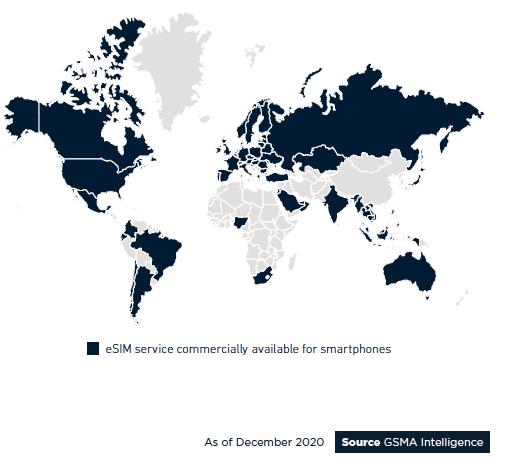 Adoption rates at an earlier stage are more likely in markets where Apple, Samsung and Huawei have, in aggregate, more than 70% of the share of smartphone users and where all MNOs provide commercial eSIM service for smartphones. Such markets include Canada, Australia, Saudi Arabia and a number of European countries such as France, Germany, Sweden, the Netherlands and the UK). In Europe, eSIM service is available in nearly all countries. However, experts expect China to take over in the middle to long term. Although it will begin its transition later than other countries, GSMA estimates that China will have approximately 400 million eSIM smartphone connections by 2025.

If the eSIM market is to reach its full potential, it will imperatively have to address two major obstacles. 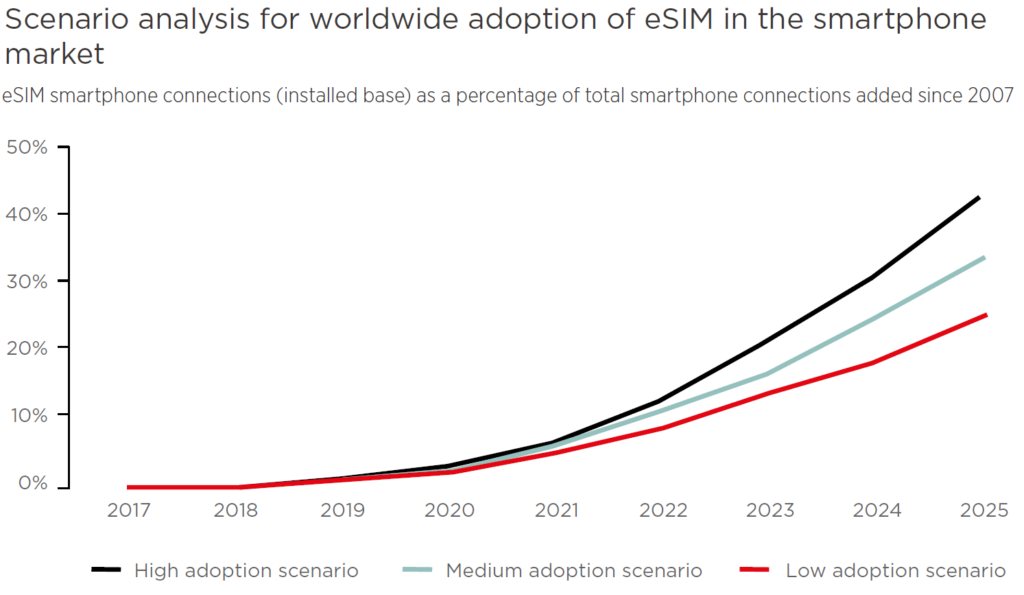 Firstly, consumer awareness will have to be increased. A research survey based on 17 major markets shows that only 20% of consumers, on average, are aware of eSIM. Awareness is higher in the 25-34 age group, 5G users and owners of other mobile devices. These figures therefore imply a need for more customer education.

Secondly, the eSIM activation process will have to be facilitated. Consumers can currently activate eSIM in different ways, including via QR codes (sent by mail or online), discovery server provided by the GSMA and mobile service providers’ apps. There is a general consensus in the eSIM ecosystem that eSIM has significantly streamlined the process for SIM activation and subscription delivery compared to the traditional removable SIM. Some players of the industry have been introducing new ways to enahnce the activationprocess: Oasis Smart Sim is one of them with the introduction of in-app provisioning, which enables the activation of the eSIM in the teclo app in less than 2 minutes without QR codes. Discover more clicking here. 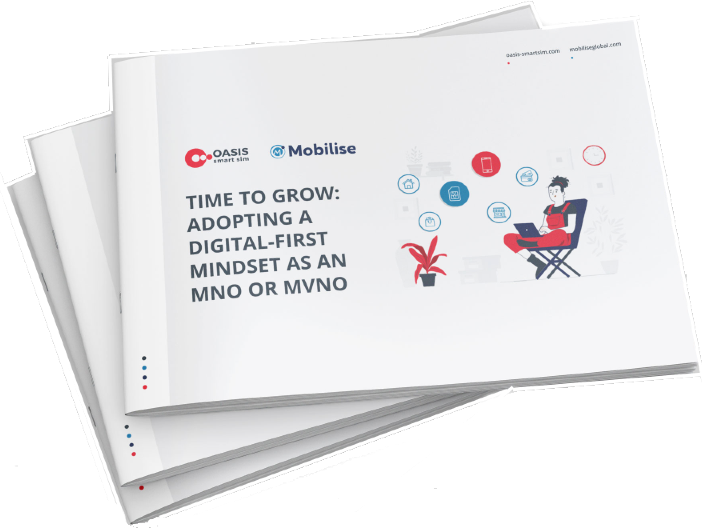 Hence, a simple and fully digital eSIM process should be the ultimate, universal goal. A consumer-friendly way to manage all the subsequent activities is also important. For vendors of eSIM solutions, this means providing well-designed, effective and widely available eSIM management platforms.

To learn more about this topic, you can download our new free whitepaper around Digital-First trategies for Service Providers, clicking here!

V) Finally, the growth of 5G will certainly have a positive impact on the eSIM market 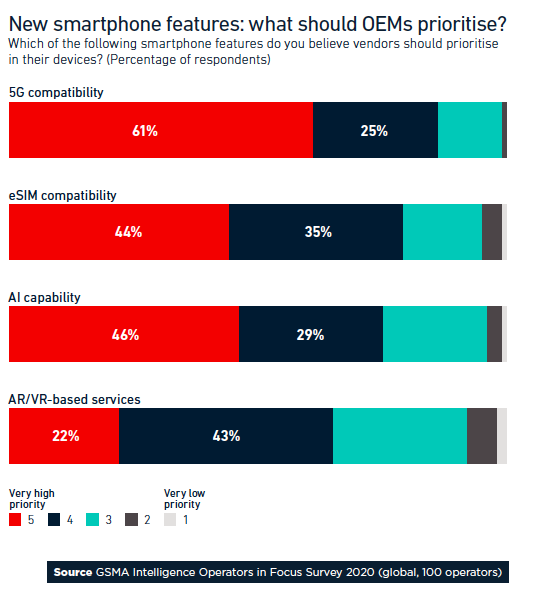 As 5G adoption grows (and because the GSMA’s eSIM specifications have been updated to include 5G use), 5G device renewals will represent an opportunity to push the transition to eSIM, as more 5G devices will have eSIM capability. The development of 5G will have a positive impact on eSIM adoption. Indeed, according to global consumer surveys published by GSMA Intelligence, consumer intent to upgrade to 5G is growing in most markets.

As eSIM made its debut in the 5G world, the growth of eSIM will certainly have a positive impact on the eSIM market. Apple, Google, Huawei, Motorola and Samsung launched 5G phones with eSIM capability, and a few eSIM-enabled 5G fixed wireless access (FWA) routers or customer-premises equipment (CPE) devices entered the market.

These developments were driven by the update of the GSMA’s eSIM specifications for 5G use as eSIM technology was introduced in a range of new 5G smartphones. For instance, Apple and Google launched cheaper eSIM smartphones which will expand eSIM adoption beyond the high-end customer segment.