5G eSIM as a Connectivity Enabler

5G enables a new kind of network service that offers much faster data transmission speed, low latency and an ability to connect many devices. It follows its predecessors; 3G, which led to the mass use of the smartphones, 4G, which allowed for faster browsing, while 1G was about voice and 2G enabled short messages.

In this context, this innovative technology is an exciting prospect for companies in the IoT industry. However, in order for Massive IoT and 5G to grow together, key players will need to simplify the complexity of their ecosystems. To reduce the complexity, actors are channeling efforts to simplify adoption processes by leveraging remote management capabilities for connectivity profiles and ensuring that efficient security safeguards can be activated with simple activation processes. These efforts are also complimented by industry initiatives undergone by the GSMA and their establishment of relevant standards.

Before describing how actors, such as Oasis Smart SIM, have managed to reduce this complexity, let's first discuss the reasons why more and more verticals, such as the automotive industry, are seeking to combine 5G and eSIM technology.

The benefits of eSIM  for Smart Cities

30 years after the traditional SIM was invented, the size of the card has decreased drastically. The eSIM chip is smaller than any other SIM form factor, to the point that it is even smaller than the MFF2. By reducing the size of the card, SIM card trays have lost their relevance since eSIMs can be embedded into the device during the manufacturing stage. This feat provides more space on mobile phones and reduces the production costs of manufacturors.

The device doesn’t need geographical location. Don’t need to select a SIM for a specific location.

The technology's reprogrammability also reduces the risks of vendor lock-ins to specific networks or operators. Instead, eSIM and eUICC profiles can be onboarded from different vendors, enabling mobile operators to offer an optimal range of solutions for their customers.

Smart cities also benefit from eSIM technology by increasing data transmission speed and improving latency. Although the importance of these improvements may vary depending on the verticals we consider, the upgrade is particularly significant for sectors such as the medical one since the speed of the network will be faster than for consumers. In addition to speed, the eSIM also ensures greater levels of privacy, especially in terms of subscriber identity.

Impacts of 5G on eSIM and the network

In addition to being beneficial to Smart Cities, 5G technology also has positive impacts on the eSIM and the network.

For the eSIM, 5G technology encrypts the subscriber's identity, increases "data" security and optimizes power consumption for M2M/IoT/NBIoT devices. 5G also inherently improves the network by increasing its speed, improving latency and dedicating slices to specific use cases (medical, automotive, infrastructure, customer etc.) For instance,  the slice dedicated to medical uses will have a higher level of speed since it can be used to perform over the air surgeries.

However, beyond having positive impacts on the network, 5G technology can also be used by OEMs for cost-saving purposes.

5G improves the users ability to use low power devices, by allowing them to suspend and resume device usage.

For example, you can put the device to sleep with a backup of the current context of the specification and authentication of the selected file. You can alter the device and put it to sleep for a period of 1 second up to 2550 days (depending on the spec). During this time, there will be no power consumption.

Once the eSIM is powered on, you can restore the same network configurations, and you can perform the same operations as before the sleep.

IoT (Internet of Things) is a generic term. It includes a wide range of different types of devices, such as wearables, automotive, smart cities etc. Smart cities are a concrete example of connected devices that are in contradiction with their requirements.

In parallel, if the car is connected with a infrastructure V2X communication. Information is needed quickly because it can impact traffic and signalization. In contrast, for smart metering, the latency isn’t as important.

Despite these major differences, there are still similiraties between connected devices. The main similarity between both devices is the level of data secrecy. Although the amount of data exchanged is often significant, reliable security safeguards exist in all cases.

Does your device need permanent connectivity if it only receives data once a day ?

Is it not a new way to generate connectivity if its on demand ?

Advanced Connectivity: should it be on demand?

Beyond having positive impacts on eSIM, Smart Cities and the network, we believe that connectivity activation should also be provided on-demand to the benefit of factory and field use cases.

To address these use cases, Oasis has designed a Cloud SIM solution called CeSIM. 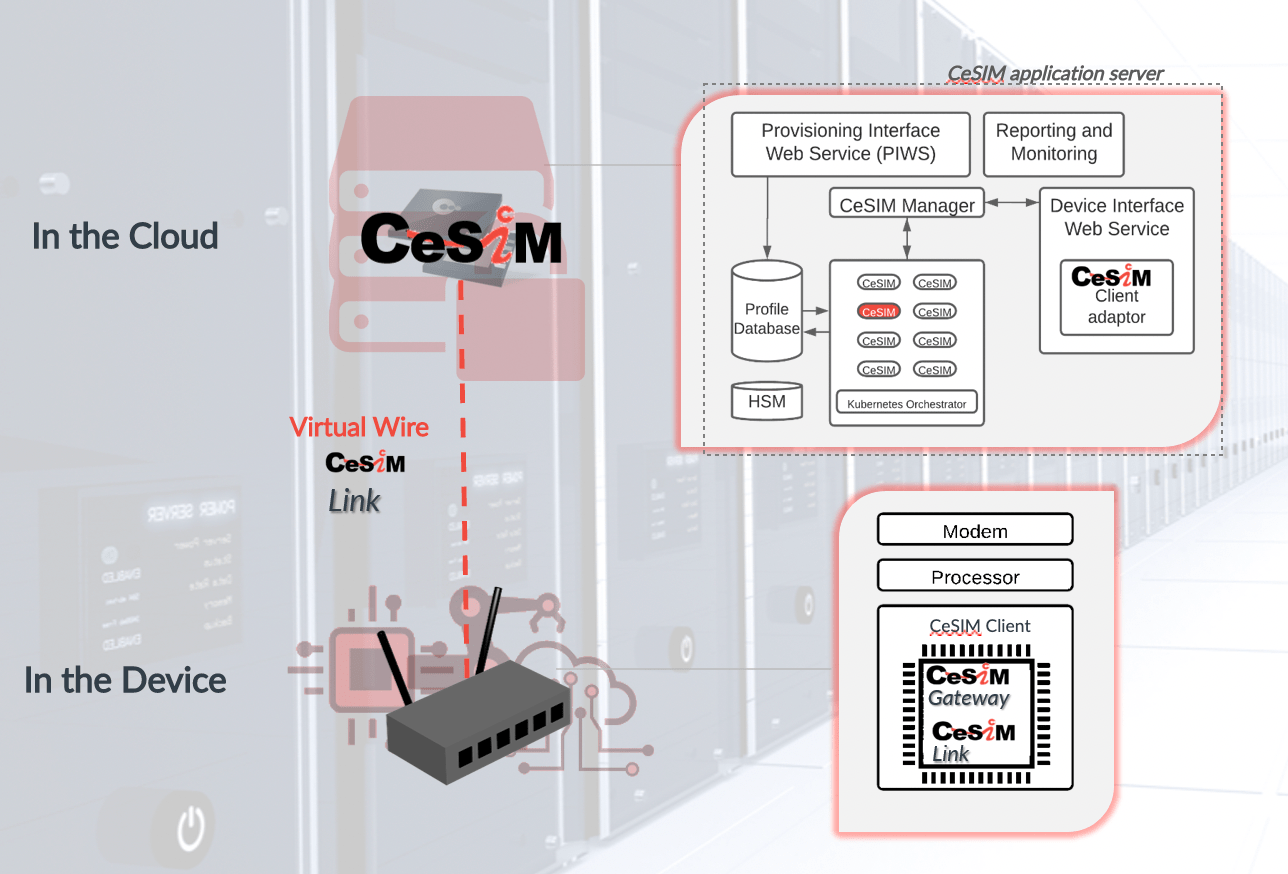 But what are the benefits of CeSIM?

The technology is compatible with current modems.

The CeSIM introduces a new disruptive mode that can be used for temporary connectivity. It is available on demand and you can deploy the same connectivity simultaneously for all devices.

To know more about this topic, watch our 20-minute webinar led by our R&D Director Jean-Christophe VINATIER tackling the topics of 5G eSIM as a connectivity enabler and how the growth in demand of connectivity with 5G will also create use cases for on-demand connectivity through our CloudSIM.